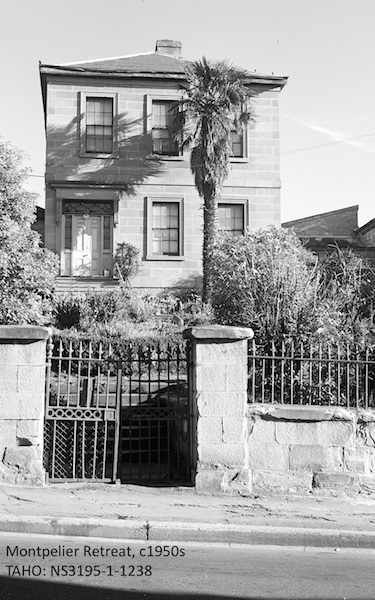 03/02/2015 In Archaeology, Project By Sarah Wilcox-Standring

Investigations are beginning to reveal Montpelier Retreat’s past. Over the past week, archaeologists have uncovered the foundations for Alexander Orr’s house and outbuildings.

Sarah McGuinness, one of the site supervisors, explains what they have uncovered.

Orr arrived in Van Diemen’s Land in 1828 and bought the site during the mid-1840s. He rapidly developed the land and it was reported that he had completed a ‘handsome edifice’ in Battery Point by September 1845. The two storey-ashlar sandstone residence and his adjacent mercantile store contributed to the urbanisation of the waterfront.

Alexander Orr enjoyed considerable business success in Salamanca and briefly served on the Legislative Council. He married Harriet Byron in 1839 and they had two sons and a daughter in the house on Montpelier Retreat. The family left the colony in 1855 and Orr decided to sell the property in 1873. The sale advertisement from the Mercury on 3 March helps to understand the building and grounds.

THAT SUBSTANTIALLY BUILT HOUSE
With cut stone Front, situated in Montpelier Retreat, well known as formerly The residence of Alexander Orr, Esq. It contains 6 fine lofty rooms, servants’ room, 2 storerooms, kitchen; also washhouse with copper, 2-stall stable, coach house, coal and fowl houses &c.. The yard, which is very spacious and convenient, is paved and well drained, and in it is a large stone cistern for water, which is laid on. The store which adjoins is built of stone, with cut front, and is perhaps one of the most convenient and substantial in the city.
It being impossible to fully describe this property, by advertisement, inspection is invited.